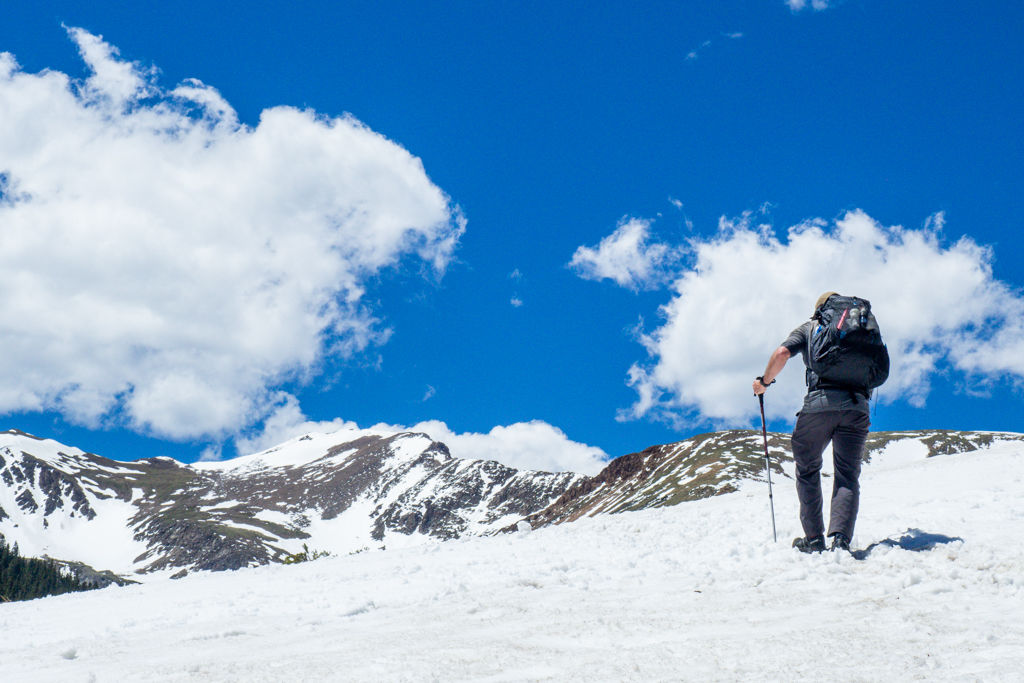 The Herman Gulch Trail is undoubtedly one of the best day hikes near Denver. With its trailhead situated just an hour’s drive from the heart of Colorado’s bustling capital, this Arapaho National Forest hiking gem is as beautiful as it is easy to reach.

Over its 6.4 idyllic miles, this out-and-back gem captures nearly everything I love about exploring Colorado’s backcountry. Vast meadows of wildflowers, abundant wildlife, incredible mountain views, a majestic alpine lake, top-notch fishing & backpacking – you can find it all along this glorious hike.

So, keep reading for a top-to-bottom hiking guide of the Herman Gulch Trail, and see exactly why it’s the perfect transition from Denver’s commotion to the calm of Colorado’s backcountry.

Preparing for the Herman Gulch Trail 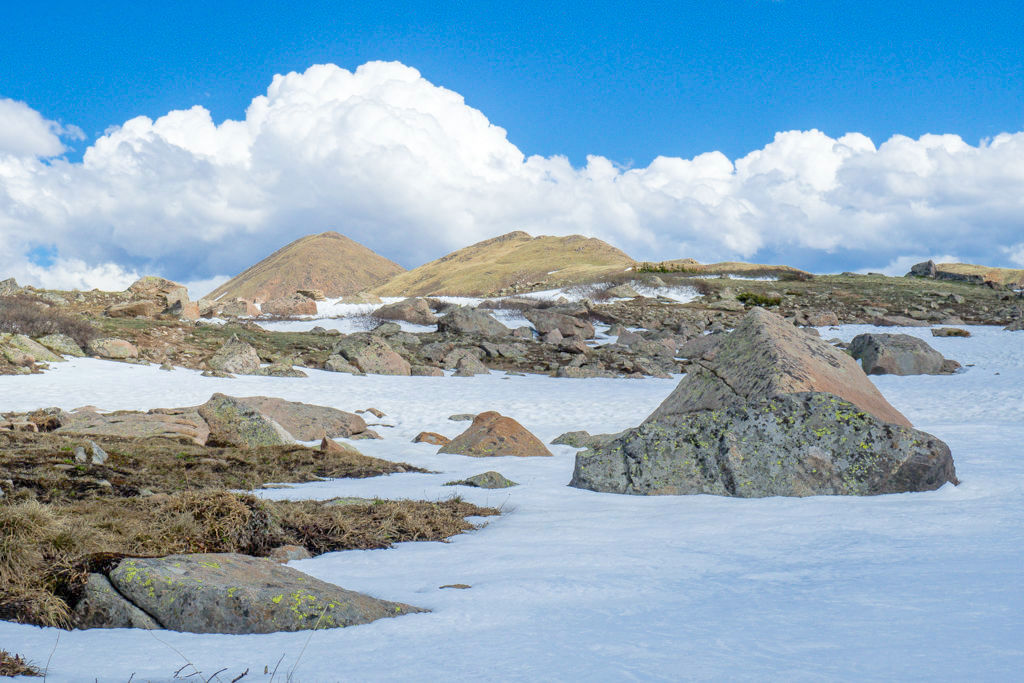 Exploring above treeline near the shore of Herman Lake

Hike the Herman Gulch Trail in July, August, or September if you want to avoid snowpack and obstructions along the trail. Outside of these months, trail maintenance is infrequent and the path is likely to be covered in snow and/or blocked by fallen trees to some degree.

Want to hike it in the off-season months? Pack your snowshoes, cold-weather hiking clothes, and give it a go. This trail is one of the most popular winter day hiking destinations near Denver.

To view current trail conditions, AllTrails for reviews and updates from fellow hikers.

Use my day hiking essentials checklist as you prepare for your hike to ensure that you don’t leave any important gear or clothing behind.

If you want to backpack in Arapaho National Forest for one or more nights, check out my ultralight backpacking gear list and backpacking meal planning posts to prepare for your adventure.

Hiking this trail should take at least three hours, so pack plenty of food (1,500+ calories) and bring at least two liters of water. To save weight, you can pack a water filter to purify water as you go. There are ample water sources throughout the hike.

Free offline maps of the trail and surrounding hikes are available for download on the Maps.me smartphone app. I use Maps.me’s maps for nearly all of the hiking and backpacking adventures I take. Maps.me’s trail maps system covers an extensive network of trails worldwide.

(The trail map above was created using the ‘Track Me’ feature of my Garmin Instinct watch. It reflects the route I took during off-season conditions when the path was often buried beneath snow and impossible to follow.)

Getting to the Herman Gulch Trailhead

The Herman Gulch Trailhead is located directly off of I-70, just an hour from downtown Denver

The Herman Gulch trailhead is extremely accessible, making it one of the easiest-to-reach day hikes near Denver. Just take I-70 to exit 218, and after you exit, turn right into the dirt parking lot, also known as Watrous Way. That’s it, the trailhead is incredibly easy to find.

Finding a spot to park your car shouldn’t be an issue, either. The parking lot is gigantic and I’ve never seen it at full capacity.

Covering 6.4-miles out-and-back, the Herman Gulch Trail gains 1,657 feet of elevation at a 4.9% grade, and rates as a challenging hike. The entire hike takes place above 10,000 feet in elevation, so make sure you’re properly acclimatized before starting. If you feel symptoms of altitude sickness, take a break, and analyze your options going forward.

For many reasons, this is one of my favorite day hikes near Denver. Reaching the trailhead is a breeze and finding parking isn’t an issue. The incredibly scenic hike has everything you could ask for: wildlife, fishing, camping, side-hiking, and gorgeous Colorado wildflowers (if you get the timing right).

Because this is such a wonderful hike, it can get crowded on the weekends during peak season. To avoid the crowds, plan your hike during a weekday or get an early start on weekends. 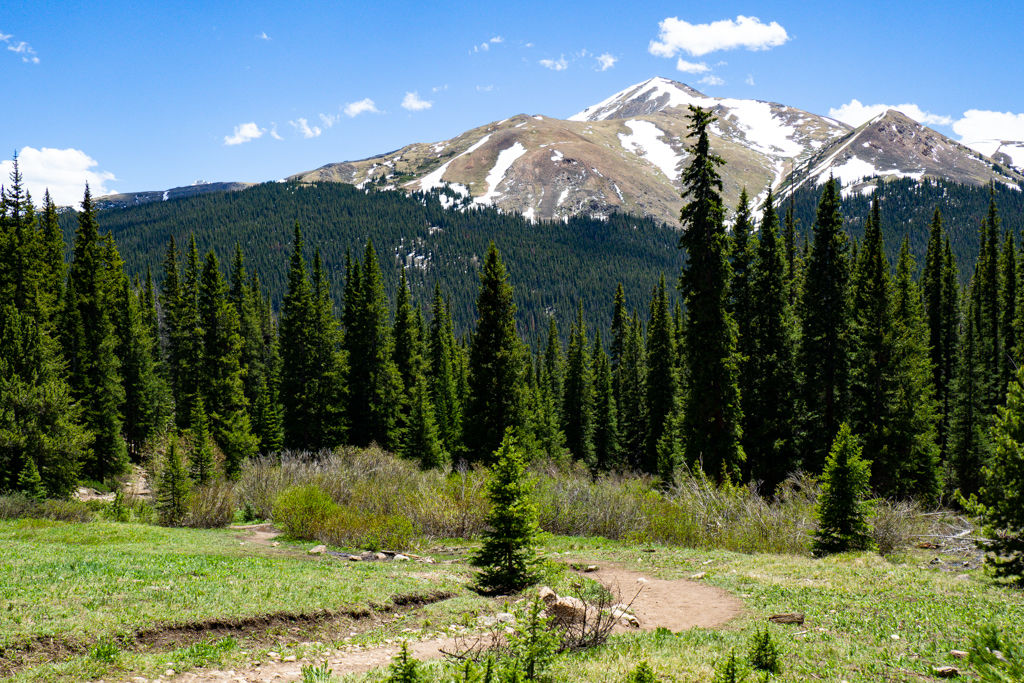 Looking back towards I-70 and the trailhead

You likely won’t be blown away during your first 15-20 minutes of the hike. Why? Because the trailhead is extremely close to the loud and heavily trafficked I-70. It takes about a half-mile of hiking until you escape the humming sound of traffic moving at 70 mph.

The noisy and congested highway will fade away quite quickly, though. Don’t worry.

The hike starts with a gradual incline through a heavily wooded forest and eventually opens up to a lush and sprawling meadow. Once you’ve reached this meadow, the sounds of traffic will have disappeared. This is when the trail starts to get special. 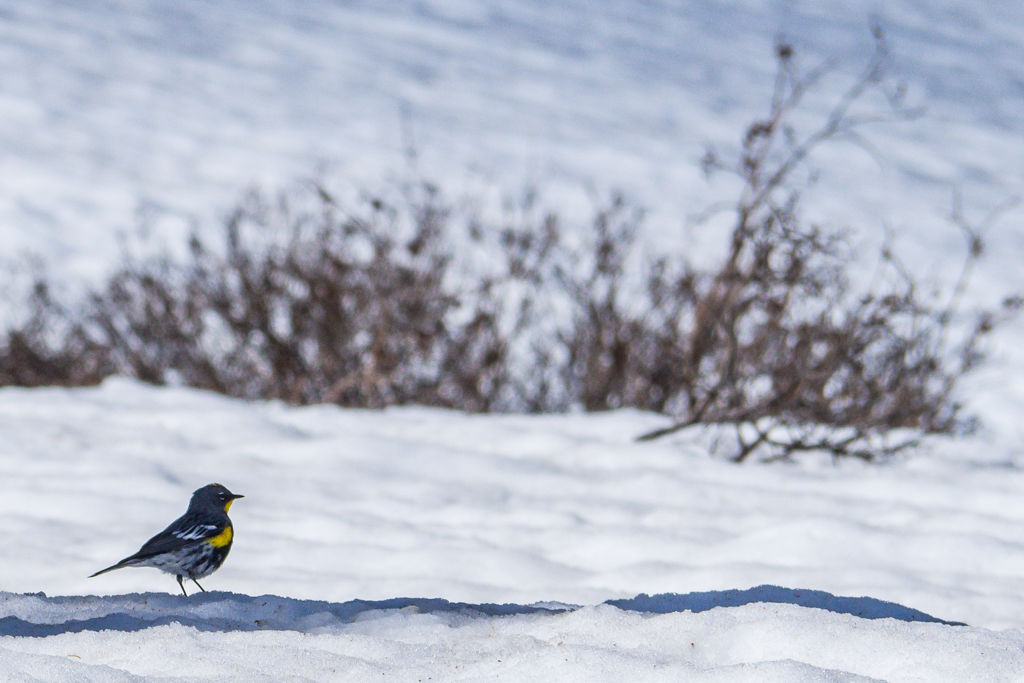 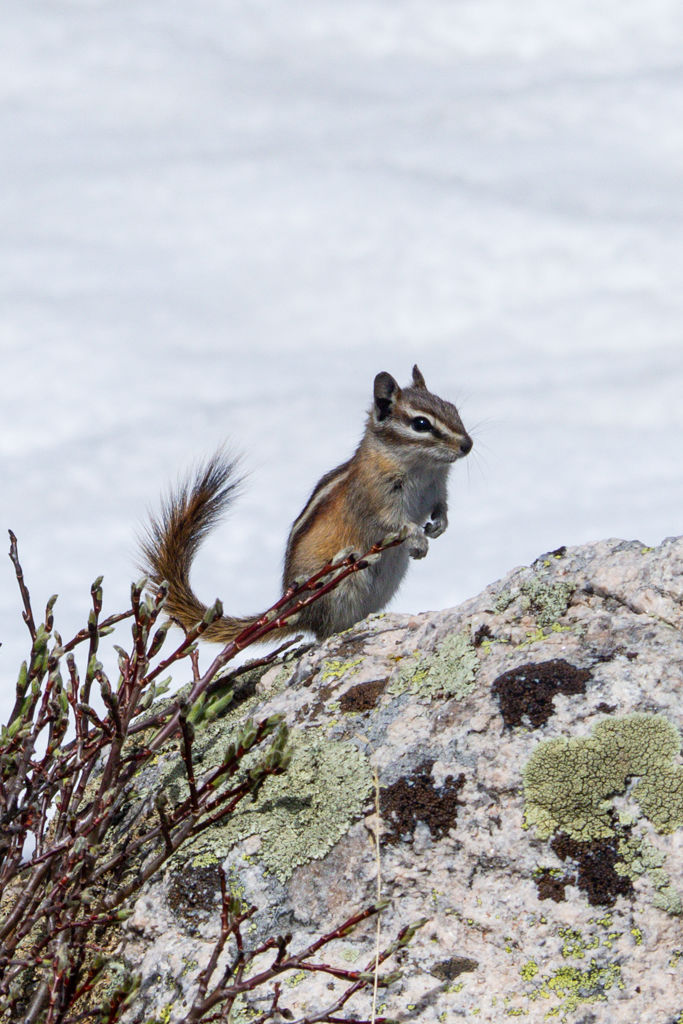 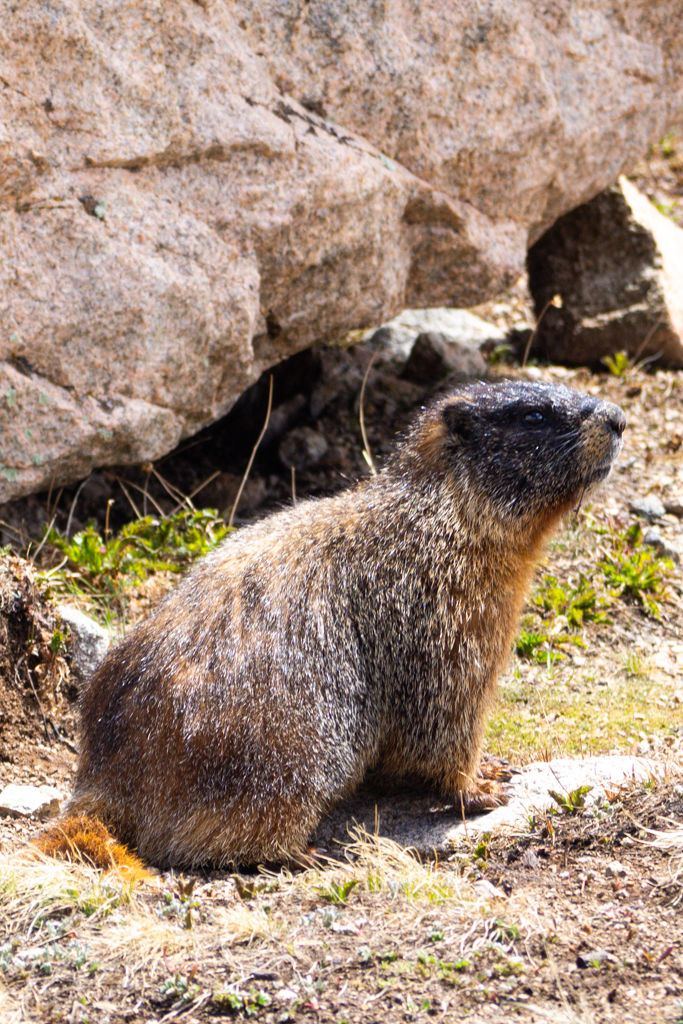 Keep your eyes peeled throughout the hike, as opportunities to see wildlife will be abundant. Chipmunks, marmots, and an array of alpine birds kept me company as I made my way up the trail.

Hawks, eagles, and other birds of prey often soar in the sky above, so keep your zoom lens and binoculars at the ready to catch a glimpse.

Moose, elk, mountain goat, and bighorn sheep also have a presence in the area, though they tend to steer clear humans. Bring a set of binoculars, scan the horizon, and you might get lucky and see a grazing herd in the distance.

This area of Arapaho National Forest isn’t known for its bear presence, but it never hurts to bring bear spray, a bear bell, or to travel in groups. Doing so will minimize risk in the unexpected event that you do cross paths with a bear.

Views of Pettingell Peak and the Neighboring Mountains 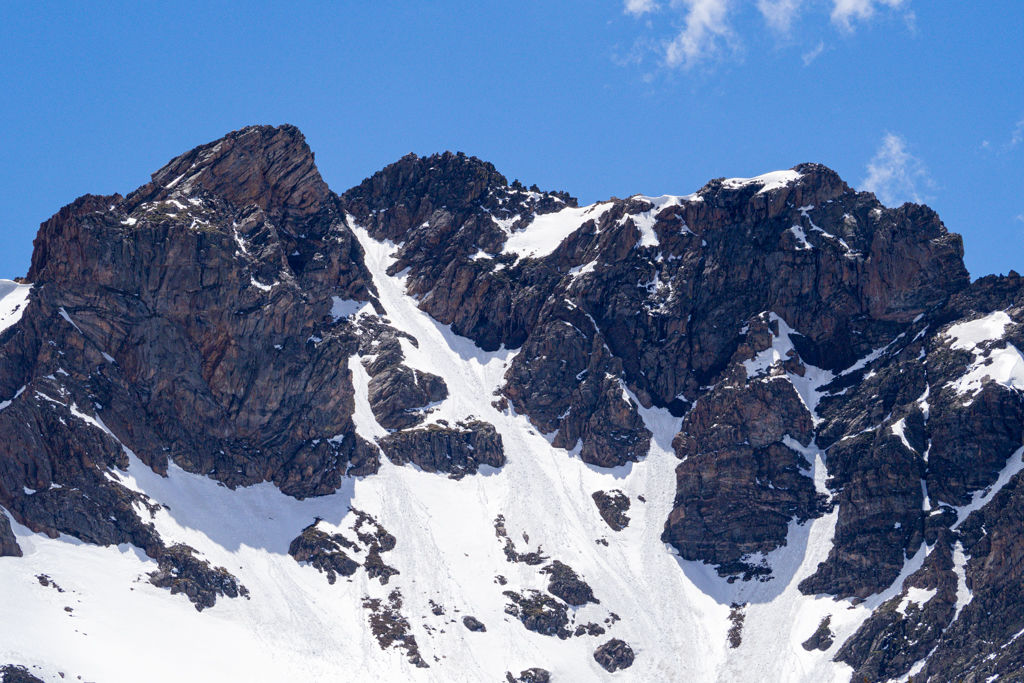 Towering peaks rise from the base of Herman Lake

After you pass through the large meadow, the trail will start a gradual climb in elevation towards Herman Lake. Tree cover will be sporadic, as you’ll be hiking between 11,000 and 12,000 feet when tree line begins.

This lack of trees will offer gorgeous unobstructed views of Pettingell Peak (13,553 feet), the Citadel (13,294 feet), and Hager Mountain (13,195), which sit near the base of Herman Lake. It’s possible to climb these mountains, but I only recommend doing so when most of the snow has melted and avalanche risk is at a minimum. Think July, August, and September.

For more information on climbing Pettingell Peak and its neighboring mountains, click here. 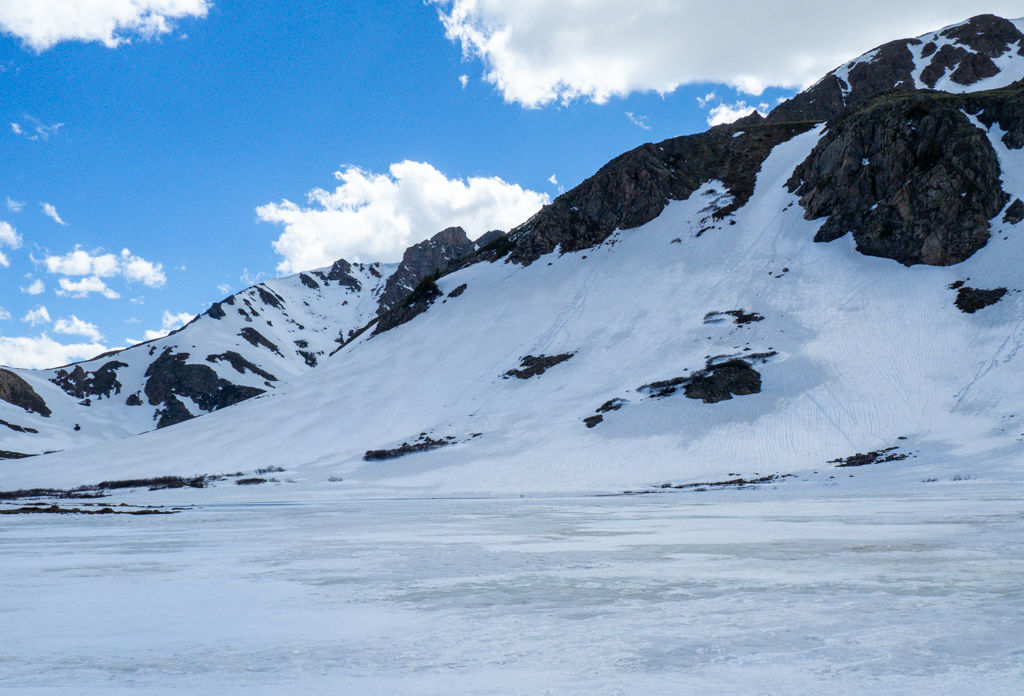 If you hike this trail during the off-season, as I did, Herman Lake is likely to be frozen over. Though the views of the lake are wonderful year-round, the alpine lake is at its most pristine during July, August, and September, when it’s likely to be thawed out.

Herman Lake sits right around 12,000 feet in elevation and is a stunning sight to behold. It’s hard to imagine this day hike is so near to Denver, just an hour drive from the heart of the city.

Fishing is allowed at Herman Lake and the neighboring creeks, but only for those with a valid Colorado fishing license. The main catch of the area is the Greenback Cutthroat Trout, Colorado’s official state fish. Populations of the Cutthroat have been brought back from near extinction in recent years, so release everything you catch exactly where you reeled it in.

Side-Hiking on the Continental Divide Trail 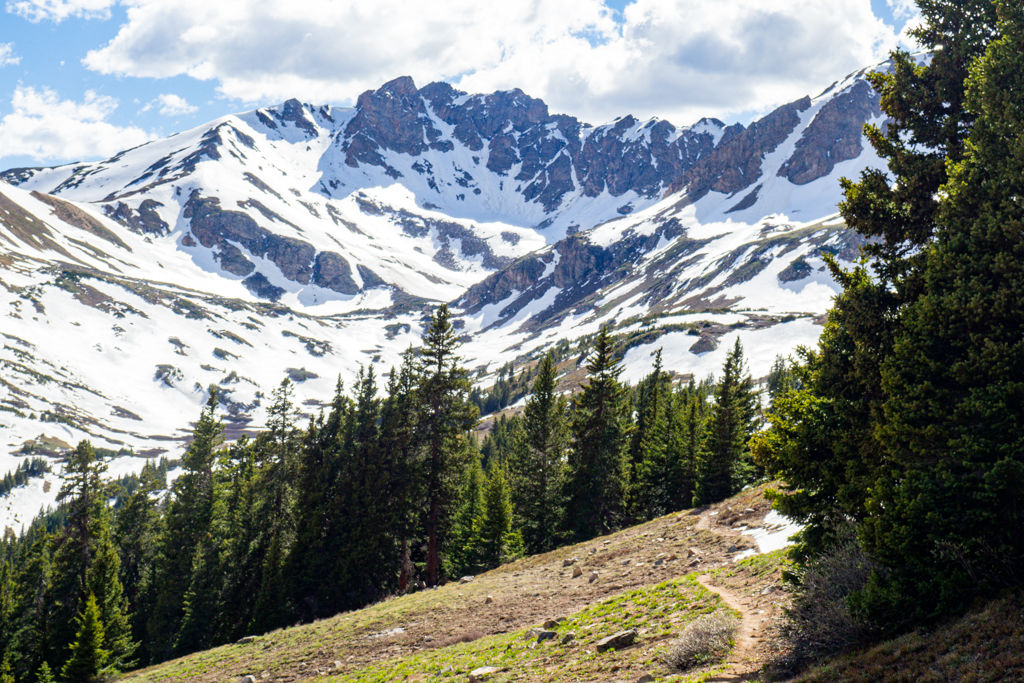 Views of Herman Gulch, Pettingell Peak, and the neighboring mountains from the CDT

The Herman Gulch Trail makes up a small fraction of the 3,200-mile-long Continental Divide Trail, which spans from the northern border of Mexico to the southern border of Canada. The CDT is known as the longest and most technical of the three thru-hikes in the Triple Crown of Hiking.

About half a mile before the trail reaches Herman Lake, there’s a turnoff where you can hike north along the CDT. The trail climbs in elevation, follows a winding 13,000-foot ridge with stunning panoramic views, and ends at the Jones Pass parking area (about 5 miles from the split in the trail).

I hiked as far as I could up the trail before it became completely buried in snow, and took off my backpack to set up camp for the night. The views of Herman Gulch with the expanse of snow-covered peaks as a backdrop were as good as it gets, and I had the entire area to myself. 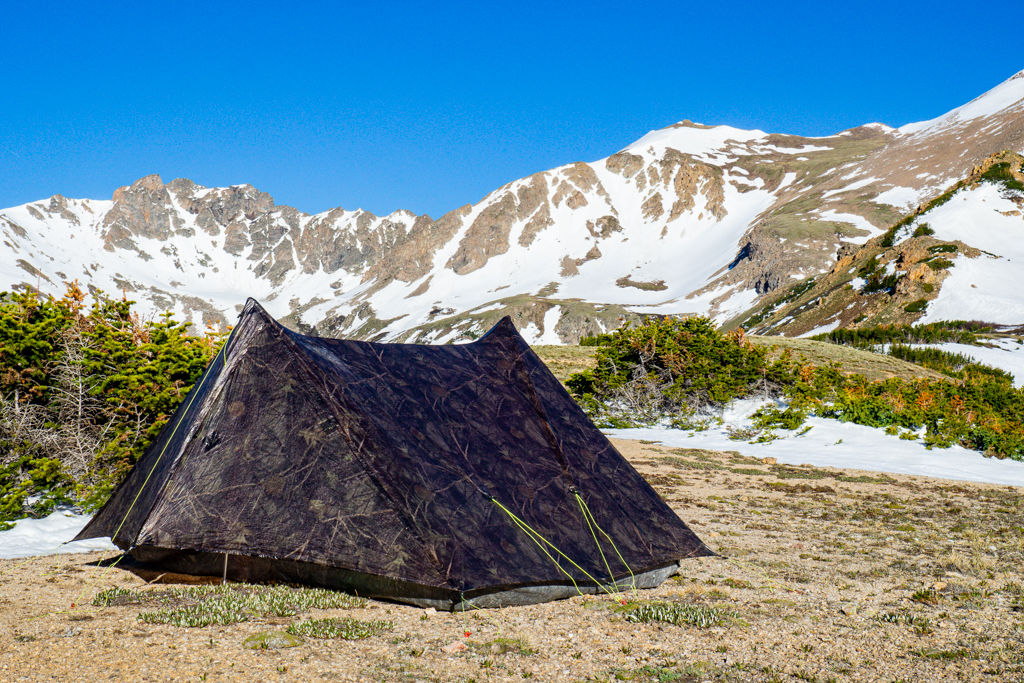 You don’t need a permit to camp in Arapaho National Forest, nor do you need to pay a fee to enter. Backcountry camping is dispersed, so set up your tent wherever you feel comfortable, as long as you’re at least 100 feet from the trail and 200 feet from any water sources.

Campfires are permitted much of the year but are often restricted during hot and dry summers. Check the Arapaho National Forest alerts and notices page for updates on the current fire restrictions.

If you’re planning on camping along this trail — all of which is above 10,000 feet — prepare yourself accordingly. Research the route, check the weather, start early, pack enough food, and bring a backpack full of warm and lightweight gear.

I hiked the trail in mid-June and set up camp just shy of 12,000 feet. Temperatures at night dipped well below freezing and I hunkered down for one of the chilliest nights I’ve had camping. At such high elevations, it’s best to plan for winter camping conditions, no matter what month you’re visiting. 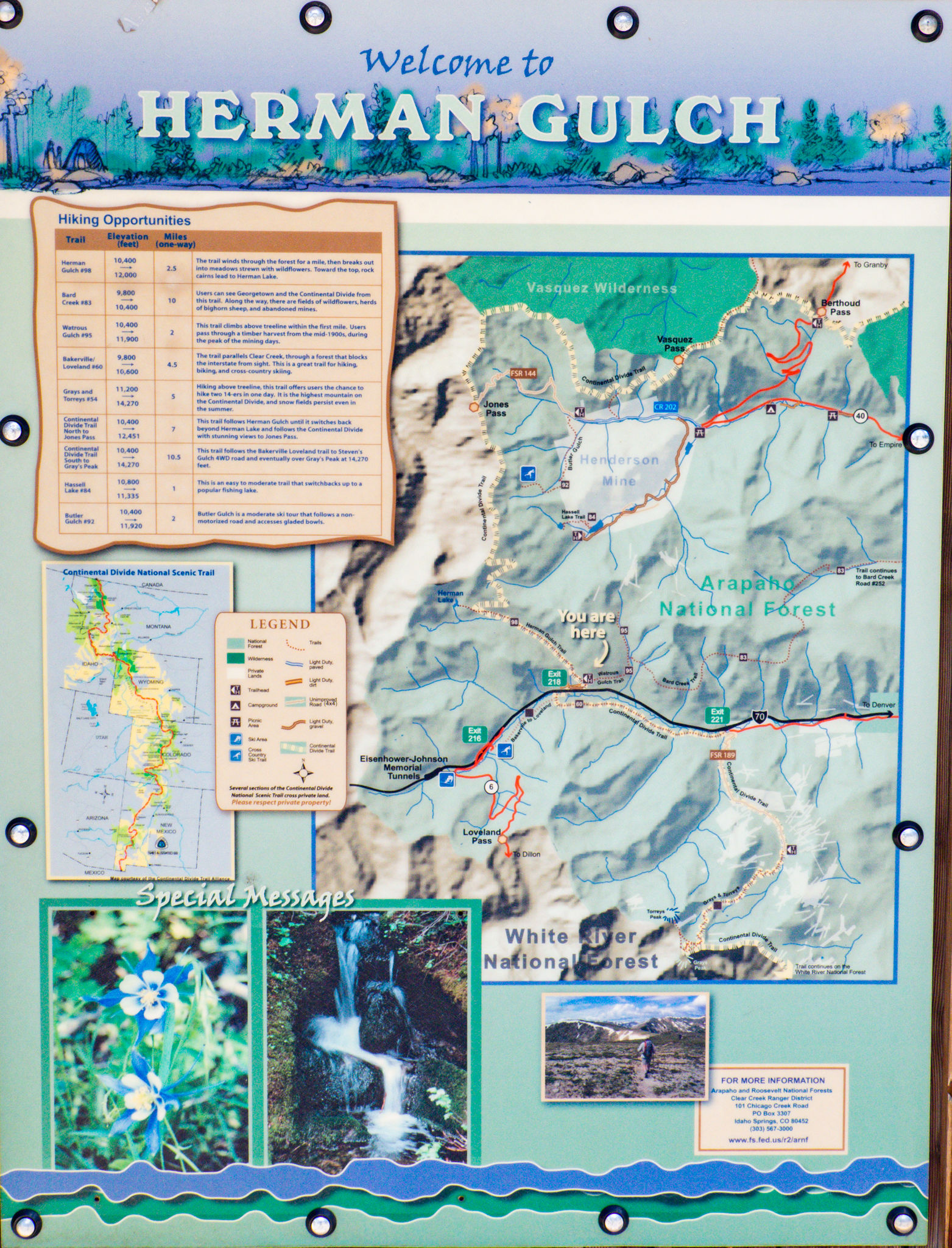 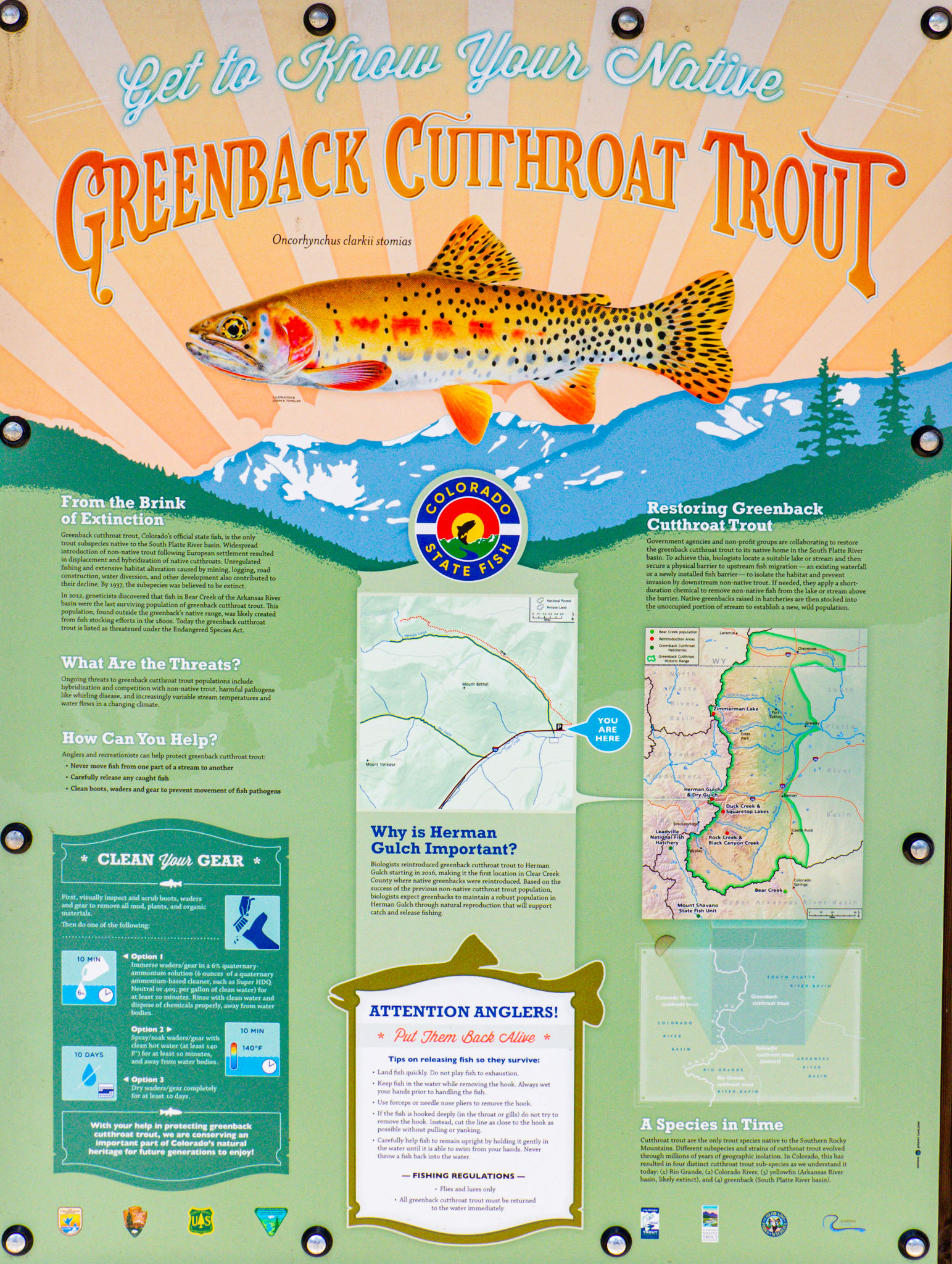 My hike of the Herman Gulch Trail was completely litter-free and a delight to experience. Early season hikers had taken great care of the trail, and it was great to see.

Pack out everything you bring with you, clean up after your pet, stash away their waste, and do your part to leave the trail clean and untainted for the rest of the world to enjoy.

For more information on leaving no trace, visit LNT.org. 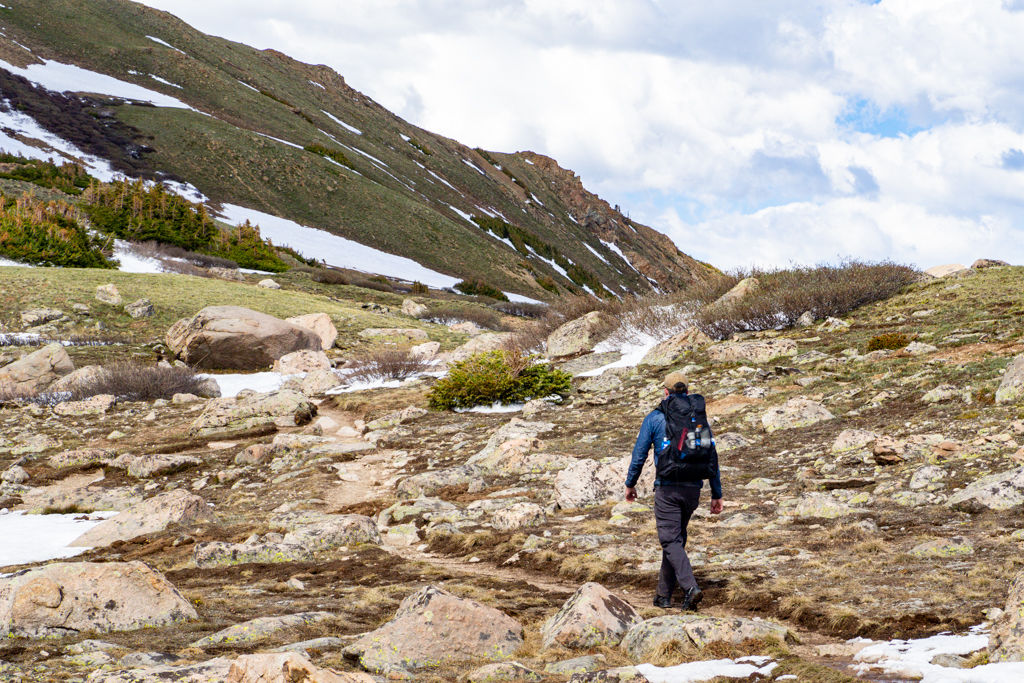 Arapaho National Forest is a hiker and backpacker’s dream

The Herman Gulch Trail is my go-to day hiking and backpacking destination near Denver, and that won’t change any time soon. The trail is just too easy to access, too idyllic, and too much of a good time. It’ll always be near the top of my list.

And every time I hike it, I experience the trail in a different way. This particular adventure, I embraced snow, ice, and serene cold-weather camping, but I’ll visit again later this summer and come across fields of wildflowers, pristine alpine fishing, and a warmer place to lay my head down.

Now it’s your turn to leave the chaos of I-70 behind and embark on an adventure up Herman Gulch Trail. So, lace up your boots and start driving, because the best backcountry day hiking near Denver is waiting.

Other Great Day Hikes Near Denver 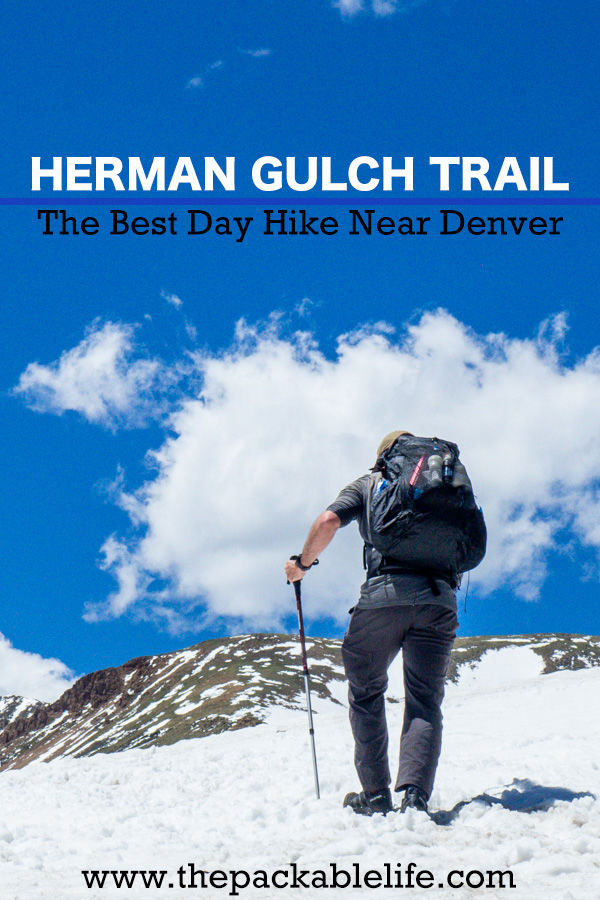 Have you ever hiked the Herman Gulch Trail? What’s the highest elevation you’ve ever set up camp? What are some of your favorite day hikes near Denver?  Leave some feedback with a comment below!

This site uses Akismet to reduce spam. Learn how your comment data is processed. 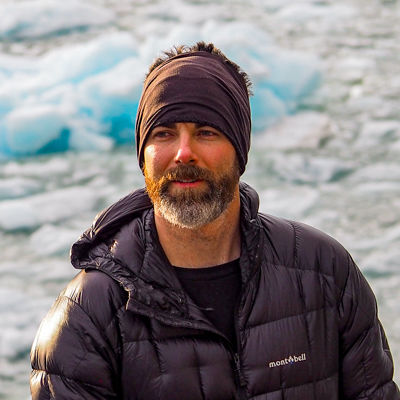 Hey, I'm Noel. I'm a minimalist traveler and ultralight backpacker. I trek into the wilderness, geek out about gear, and travel with the least amount of baggage as I can. I almost always travel solo -- it's the best way to see the world.

END_OF_DOCUMENT_TOKEN_TO_BE_REPLACED

• How to Become a House Sitter

• How to Start a Killer Travel Blog

• How I Saved to Travel the World

• Get Paid to Hike & Backpack 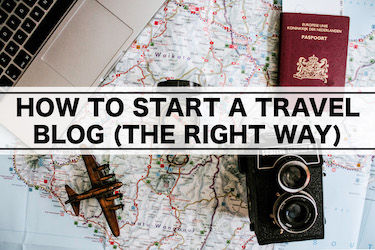 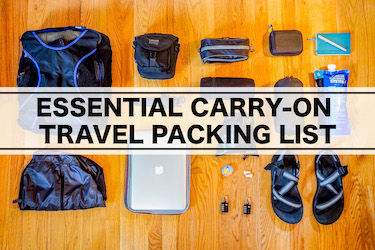 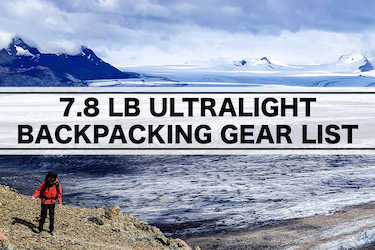 How to Become a House Sitter

How to Save for Travel

Work With Me | Reach Out